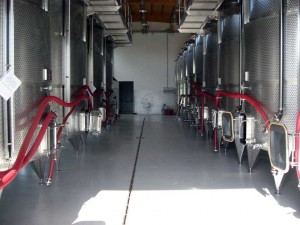 Montepulciano d’Abruzzo is definitely the most representative wine in the region.

Several historical documents prove in fact that the Montepulciano vine has been present in this area, where it has found its election place, since midway through the eighteenth century.

Cultivated in the past in the Peligna Valley (province of L’Aquila) and in the internal hills of the province of Pescara, starting from the ‘50s its cultivation has been extended throught he hills and today it is the main red vine in the area.

Montepulciano d’Abruzzo DOC is only obtained from vineyards located in hilly grounds or plateau, whose altitude must not be higher than 500 metres above sea level and exceptionally 600 metres for those southwardly exposed. The surface registered for this specific cultivation is about 13.700 hectares.
The maximum grape yield per quintal must not exceed 140 for hectare while the minimum alcoholic gradation must be equal to 11,5% vol. Montepulciano d’Abruzzo is exclusively obtained from the grapes of the homonymous vine, with a little addition (max 15%) of other grapes coming from different red berry vines that can be grown in the territory of Abruzzo region.

It is adaptable to several cultivation systems, it is resistant and generous; it produces a wine with decidedly interesting organoleptic features of immediate pleasantness if drunk “young” (from six to eight months to eighteen months from the vintage, as happens with many less expensive wines), while it proves to be complex and superior in quality when aged for longer in oak barrels, as happens with more expensive wines.

Since the vintage 2006, the long-awaited revision of the disciplinary, which rules the production of Montepulciano d’Abruzzo DOC has come into force.

The main news as regards in analytical data is the recognition of two “ Under denominations” for the province of Pescara: “Terre dei Vestini”, on about 1.000 hectares located on the internal and coastal area, whose production limit is fixed in 100 hundred kilos/hectare and a “minor area” (sottozona) “Casauria o Terre di Casauria”, with an extension about 250 hectares of vineyards in the internal and south-west areas with a production limit fixed to 95 hundred kilos/hectare.

In both cases, to be labelled with an additional denomination of origin, the wines must age at least 18 months of which at least 9 must be in wood, that becomes a minimum of 30 months (of which 9 must be in wood) for the Reserve label.

This accolade, up to now a prerogative only for “under-areas” is also extended to the whole red denomination typology, if an ageing/refining not less than 24 months occurs, (of which at least 9 months should be in wood) within the production zone.

In fact, the disciplinary of the Montepulciano d’Abruzzo DOC , since 1968 has included the typology Cerasuolo, obtained from the same Montepulciano grapes, but a with a different technique of wine-making, which is based on soaking the grapes with their peels for a limited period of time. 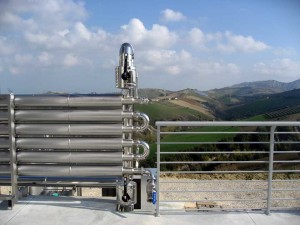 This ancient method of making wine, very common in the Abruzzo villages, has continuously been technically improved through the years.

This wine is the product of a different vinification technique in which either the fermentation period in the presence of the grape skins is limited to a few hours or the vinification is carried out “without skins”. It is cherry red in colour, more or less dark, and has the denomination of “Cerasuolo”.

Cerasuolo has a pleasant bouquet which is delicately “winey”, fruity, delicate and intense. It has a soft, dry, balanced and delicate taste with an almondy aftertaste.

It boasts an extraordinary freshness which, together with the elegance of its bouquet, makes it a very pleasant and appealing wine.

In his work written in the XVI century “De naturali vinorum historia” Andrea Bacci testifies the existence in the Peligna and Fucino area of a wine made from “Trebulanum” grapes.

Today Trebbiano d’Abruzzo is made from and/or Trebbiano Toscano vines only or jointly with other white berry vines up to a maximum of 15%, which can be located in hilly grounds or plateau not higher than 500 metres above sea level and exceptionally 600 metres for those southwardly facing.

The maximum yield of grapes destined to the wine-making must not be higher than 140 quintals per hectare while the mi-nimum alcoholic content should be 11, 5%.

Trebbiano d’Abruzzo is a mid to late maturity vine that usually occurs approximately from September 20th to October 10th.
It is cultivated in Abruzzo in more than 13 thousand hectares that produce about 190 thousand hl/year of DOC wine.

Although it is ranged among the noble vines it has found an ideal ecosystem in Abruzzo and has achieved excellent results producing both good young wines and wines for later consumption, made by fermentation or ageing in big or small oak barrels. 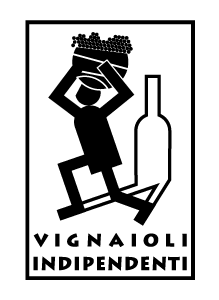